The judges worked long and hard going through the hundreds of submissions in this year's Halloween Photo Contests, and they have finally narrowed it down and chosen the winners! There were so many incredible entries, from funny to scary with everything in between, and all of them were super creative, so this was a really hard contest to judge! It took a little bit longer than we had hoped, but prizes are worth waiting for, no? We appreciate all the pictures that were submitted, and hope that you all had as much fun entering as we did getting to see everyone.

You can watch a video of the entries above, and check out the winning entries for each site below. (If you don't see your picture in the video, it's likely because it didn't have a tablet or phone in the picture. Gotta follow those rules!) Winners are posted below.

"They said we could be anything we wanted to be, so we became roller coasters. My girlfriend hand made everything." 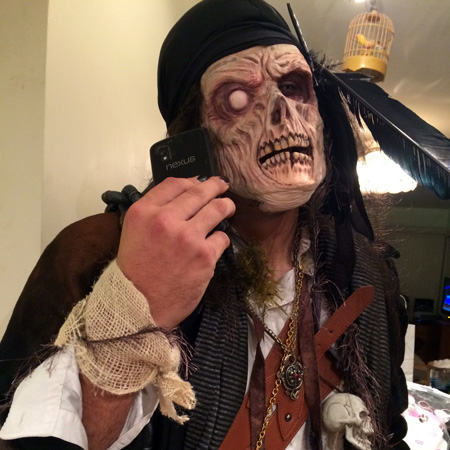 "Here is my entry with my N4 displayed prominently in the center."

"Captain America and Wonder Woman hanging out with Leeloo!"

"The Queen of Hearts!"

"I'm entering this on behalf of my mom. She's terminally Ill right now with stage 4 cancer but she managed to carve this pumpkin for me and my dad (who is an android development teacher at the nearby college). She broke her Android phone a few months ago, but was able to get her hands on a plush Lloyd to hopefully be able to enter the contest."

"Who needs meat when you have Blackberrys?"

"My wife and I at a friend's Halloween party last night. We are a pair of enormous HONKERS with cleavage!!! Costume totally made from scratch. The purple bra was made from a bed sheet bought from Value Village then cut up. The sweaters were from an outlet store. And the actually bump was an ANGRY BIRD!! We are sporting the CrackBerry logo on our black and white Z10's."

"This is my picture with me dressed as Steve Jobs (I work at an Apple reseller called PeachMac, I used to work at the Apple Store for 3 years, but left when Browett took over). So this is me as Steve and my buddy is in the background as the GingerBread Man!"

"The Working Dead! My iPad is in my chest with a beating heart and my iPhone is in the poster behind with roving eyes."

"This is my daughter and my twin granddaughters. They were at a Halloween fair in downtown San Antonio and their dad was getting ready to take the picture when this guy all dressed and scary came around my daughter and said AGHHHHHH and my granddaughters just got scared and screamed. Their dad went to look to see who screamed and took the shot with noticing her scared face."

"My girlfriend dressed as a sexy kitten."

"Why would a zombie and Snow White get along together you ask? I'll tell you why...they both LOVE iMore and they both obviously love their Apple products!"

" 'Window's Phone Central, Now on TV!' This is a picture of myself taken in front of a 63" TV displaying the Windows Phone Central Website."

"A group picture from our #HalloweenHack 20 Windows phone apps produced!"

"The Force is great, but nothing communicates like Windows Phone!"